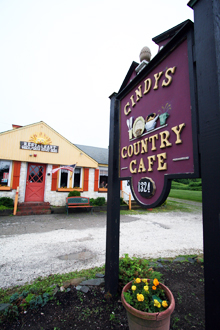 Ok, it’s a month later and we’re back in Newport. I loved their food the first time and even more so the second time. I had their omelette special (bacon, tomato, cheddar and avocado) and it was delicious. This is what a hearty breakfast should look like. I highly recommend it – again.

You put together a great dinner for the women of the Newport County Mosaic Club. Thank you.
Teresa Occhuizzo
Vegetarian dishes are offered at the restaurant that offers soup, catering, BYOB and serves hearty breakfasts.
Christy Buena

The party was a huge success; we did not have to worry about the food part and just really enjoyed being with friends and family.
Elaine Southwick

Portsmouth cafe is a dream come true for Cindy

Like most entrepreneurs, Cindy and Lyle Morse dreamed of owning their own restaurant one day. They met while attending Smithfield High School and after graduation they entered Johnson & Wales University Culinary School.

The couple worked at various restaurants in Rhode Island and Massachusetts for several years. The thought of owning their restaurant was still a goal. The decision finally came to fruition with a paycheck. They had three toddlers at the time. When Cindy wrote a check to pay the babysitter one week Cindy realized that it took all of her paycheck and some of he husband’s. She also realized that the long hours that are common in the restaurant industry meant that she was never home and someone else was raising her children. Cindy decided to stay home with the children.

One day she saw a newspaper ad for a breakfast and lunch diner for sale. Such a business would allow Lyle to put the children on the bus for school in the morning while Cindy operated the business in the morning and be home to greet the kids when they came home from school. This would be the best of both worlds. She could be a mom to her kids and still realize the dream of business ownership while enjoying the gratification of being in the restaurant industry.

Cindy didn’t know what her next move should be. So she turned to the Rhode Island Small Business Development Center office at the Newport County Chamber of Commerce. There she met Sam Carr initially and John Nelson who helped her to develop a business plan and introduced her to Russell Gaston at Coastway Credit Union. Writing the business plan now became Cindy’s full time job. After nearly three months, the plan was ready for review by Russell. Cindy’s Country Café was created with a ten-year SBA guaranteed loan. Cindy bought the 42-seat restaurant but is leasing the building, which is located on West Main Road in Portsmouth.

Cindy now relies on Stacey Carter, the regional director of the RISBDC at the Newport Chamber, for guidance as she continues to build the business. Stacey is her sounding board for new ideas.

While Cindy operated the café, husband Lyle was an executive chef for a major corporation in Boston. He also taught culinary classes at Johnson & Wales University, and was the executive chef at the Viking Hotel in Newport.

Cindy said the first day was the scariest of her life. The business had very little clientèle. She soon realized that she should have allocated more money for advertising initially. That was the biggest mistake that she made.

Cindy built the business on reputation, word of mouth, and acceptance by the locals. Since the second year of operation, Cindy has not spent one dollar on advertising. Yet business is non-stop from the time it opens at 6 a.m. Until it closes at 2 p.m., seven days a week.

Aside from the walk-in trade, Cindy does a lot of business with the military community in Newport. She also provides provisions for racing yachts and charter boats at the Newport Yachting Center, Newport Ship Yard and other marinas.

Cindy credits the success of her business in large part to her very competent staff. There are 7 full time employees and that number grows to 12 during the summer tourist season.

On June 1, Cindy and Lyle will expand their business with the establishment of a restaurant and bar at the Newport Beach Hotel and Suites in Newport. Lyle will be the executive chef while Cindy will be the overseeing manager.